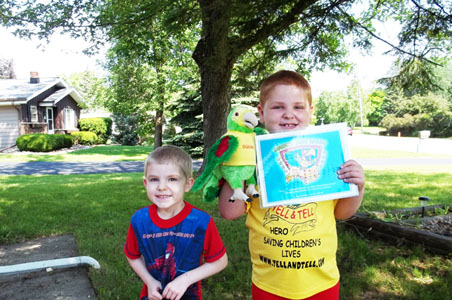 Spencer
Spencer is a young boy who learned Yell and Tell in school and used it when he saw his younger brother in trouble. The boys knew the rule not to bother Mom when she is in the bedroom feeding the baby. Spencer came in yelling, telling his mom that his brother Connor had a rope(it was a dog leash) wrapped round his neck and was choking. Spencer knew he wasn’t supposed to bother his Mom when she is feeding the baby and putting her to sleep unless it is an emergency. There had never been an emergency before so she was surprised to see him actually come in yelling. Spencer recognized a bad situation and came running in using the Yell and Tell steps that he had learned in school. Spencer is a Yell and Tell Hero.
<< Back to Heroes Page