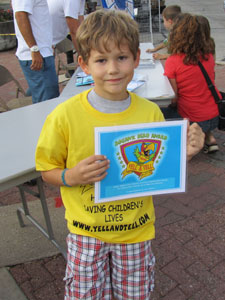 James
James is a Yell and Tell hero for using Yell and Tell to prevent a very dangerous situation from becoming a tragedy. At the new pool in Wisconsin there is a sand area for the younger children. One day while James and his family were down at the pool. Two big boys were making tunnels in the deep sand. They got bored and left. A little boy thought it would be neat to crawl in the tunnel. When he was in the tunnel, the sand collapsed on top of him. James saw what happened and saw only a foot was sticking out of the sand. He yelled right away for help. His mom came running and James told her what had happened. She told him to get a lifeguard and then she started digging the young boy out of the sand. It took two minutes to get him out but when she did, he was okay. James was given a Yell and Tell hero award and a hero t-shirt from both the Yell and Tell Foundation but also the Fire Department.
<< Back to Heroes Page