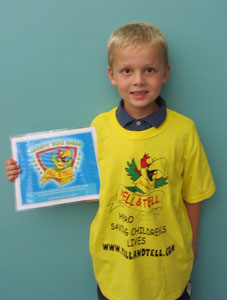 Lincoln
Lincoln’s Dad wrote: “My son Lincoln attended and learned the Yell and Tell program at the YMCA. Lincoln this weekend used the skill he learned with Yell and Tell by alerting me of a dangerous situation. Lincoln was riding his four wheeler at our camp when it caught on fire, he jumped off and it rolled down a hill. Where it exploded in flames and started a very dry woods on fire!! I was 100 yards ahead of him checking a deer camera. I heard some yelling coming from behind me and I turned around. I thought he saw a deer antler or a deer or a mushroom, then he started running at me and yelling. I jumped on my four wheeler to see a massive fire starting! Lincoln was not injured at all! I called 911 and had three fire trucks out there along with the Sheriffs Dept. I know if Lincoln would not have alerted me it would have been a massive forest fire! Later that night he said he used the Yell and Tell program to alert me! I said, What?????? He then sang the song and did the body language. All I can say is it’s a great program and I can’t thank you enough for doing this. I am saddened that the program had to start because of Ryder, but the spirit of you and your grandson was with Lincoln that day.”
<< Back to Heroes Page