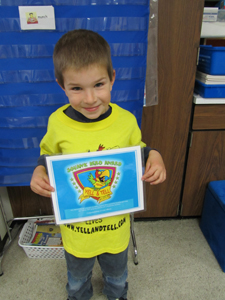 Asa
Asa’s parent wrote: “I was inside our house preparing the evening’s meal to go out on the grill. Asa’s older brother was outside mowing the lawn. Asa and Alex shouting in the backyard isn’t really unusual but that evening I opened the back door to go out to investigate. I found the yard thick with smoke. As Asa tells it, he had been riding his bike in the driveway and heard a crackling noise behind the fence that separates the driveway from the backyard. He opened the gate and found a shrub next to the garage on fire. His brother saw it shortly after that and brought a hose, while Asa went around to the garage door and moved the mower and fuel cans out before the fire burned through the wall. By the time I came out, the fire was out. I called 911 and had the fire trucks come out to make sure it was out and safe.”
<< Back to Heroes Page